Grow your own fertiliser

Grow your own fertiliser

Trying to garden for food and other produce with difficult or limited soil can be challenging. One way to build fertile new topsoil, either in a bed or growing box, is to bring in plant materials as green manure. These can be used as mulch, added to compost heaps, or used to make liquid feeds. Over time, practice and experiment have led to recognition of a number of plants which act as biomultipliers- that is plants which accumulate particularly useful nutrients. Perhaps the best known is the common nettle, a plant rich in available nitrogen, one of the three crucial macro-nutrients and suitable for use in compost or for liquid feeding. Thanks to the work of the Henry Doubleday Research Organisation, organic growers will also be familiar with Russian Comfrey, a biomultiplier for Potassium, also known as Potash, a critical macro-nutrient for development of flowers and fruit. 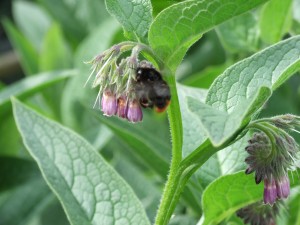 Comfrey is a wonderful addition to any garden, growing up to 1.5m by late spring its cascades of purple flowers are a valuable source of nectar for bees. The broad flat leaves suppress grasses and other low plants, making it useful as a barrier plant in borders. On a broad scale it can be planted between rows of fruit trees, bushes or canes; on reaching full height it can simply be cut down and thrown under the fruiting plants (“cut and throw” mulch). In a smaller garden, or even growing in containers, comfrey can be used to make a versatile liquid feed.

A Comfrey border reaching a suitable height to begin cutting, mid to late May 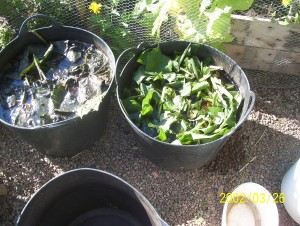 On the right, a fresh tub of comfrey chopped up and soaking in rainwater.

The finer the comfrey is chopped, the quicker it will release its nutrients

into the water, pay particular attention to the stems as these are tougher

The tub on the left shows the result after about a week, at normal summer

temperatures and is ready for use. Your nose is a good guide, if the mix

is begin to get smelly, it’s ready to use. The longer you leave it, the stronger

the solution becomes (and smellier).

When the mixture is ready, simply strain it. Leave it for a while to drain well. The residual plant material can be applied as a mulch around hungry plants like courgettes, fruit bushes etc. or added to compost heaps.

The strained liquid can be added to normal watering. I tend to use between 25% and 50% of liquid feed depending on the exact plants I am feeding, more for cropping plants, less for flowers only.

A nettle feed for nitrogen to strengthen plant or woody growth, is made and used in exactly the same way. If you gather nettles from random locations make sure they are not in an area which has been sprayed- you could bring harmful chemicals into your garden. Plants which have deep taproots, like docks and thistles, can also be used to make liquid feeds which will help with essential trace elements, but make sure to avoid getting seeds into your system!